K'theenya (Kuh-theen-yuh, soft th) is a kitsune/ferret angel hybrid of dubious morals, who does whatever seems like a good idea at the time. She is often drunk.

As she can shapeshift K'theenya's exact appearance can vary as the situation demands, but normally she sticks to minor variations of one of two forms. Generally in any form she keeps only one tail visible, and hides her wings.

Her "human" form pictured is of a slender tan girl of slightly above average height in her early 20s. Her hair is orange and most of it is only a bit past her shoulders and worn loose, with a knee length tail in the back that is worn in either a wrap, a ponytail with hairbands down it at intervals, or a braid. She appears to be wearing too much eyeliner as a result of retaining her 'mask'. Her eyes are silver to light blue with slit golden pupils. Sometime she changes them to black.

Her sense of style involves wearing obnoxious amounts of corduroy. She wears a shirt that shows her midriff, her blue collar which was a gift from Shikhazra, jackets, hats, a belt, and long pants or shorts. Her shoes, when present are generally slip ons.

Even as a human she'll retain her black tipped rounded foxlike ears, and at least one fox tail. Her tails are tipped with white with a border of black separating them from the red.Her wings are covered in the same shade as the majority of her fur, except for the tops which are rimmed in black, and the bottoms are tipped with white.

Her true form is often called a ferretfox or foxferret. She mostly has the body of a ferret with the coloring, digitigrade feet, canine head, and mobile ears of a fox. Her fur is predominantly red-orange in color with a white belly and black markings up her legs. She has a black mask around her eyes which is usually distinct from the black around her muzzle. She also has a black 'saddle' mark down her back.

Her true form ranges between a small fox and a large wolf in size depending on the situation. When fighting or digging her claws can be lengthened to be comparable to a badger's.

She is actually more comfortable in her real form, but due to difficulties with communication and lack of thumbs isn't in it very much when others are around. Her energy repletes faster as well as injuries healing better in her true form.

This form is also more useful for sneaking around as people are more likely to assume she's just someone's strange looking pet.

K'theenya is essentially a ferret possessing all the powers of a 9-tailed kitsune. She's also a bit of a drunk. Really given this she acts about how you'd expect. Despite her hybrid status she tends to consider herself a kitsune. The only thing she really cares about is not being bored, and is just as happy chasing around a laser pointer as going on a treasure hunt. Generally if she's involved in a larger cause it's because that's what her friends are doing.

Her maturity tends to vary depending on how she feels that century. Sometimes she'll spend them drunk out of her mind or asleep, and other times she'll take on students to pass some of her magical skills to. A few of them feel like they owe her their lives and others resent her carefree attitude despite her immense powers.

Within K'theenya's first century, she was mostly around her mother, as her father had gone off to do other things. After she became an adult, her mother was killed by unknown perpetrators. Her father went after them, but if he even knew of his daughter's existence is unknown, so she didn't even know about this nevermind his fate. When she was around 50 years old she met and fell in love with another young kitsune, but human hunters killed him. She befriended Shikhazra when she was still young.

It's hard to put a finger on K'theenya's exact age as she tends to dismiss as trivial things others would consider kind of important. She even claims to have met herself time-travelling a few times, but it's hard to tell if they were her, alternate universe copies, or if she's just delusional. The earliest landmark of her age is apparently one time she fell asleep and when she woke up? BAM CHINA.

She gained her ninth tail through highly unorthodox methods, but has no memory of quite what as she was blackout drunk at the time. Whatever they were they seem to have been the final straw as it made an organization known as the Kitsune Council declare her an enemy, and even that all hybrid kitsune with magical creatures must be eliminated. On gaining her 9th tail her eyes switched from light blue to silver with gold pupils. Sometimes the Council succeeds in sealing her into some object that retains a fox on it in some way.

On her most recent bout of being sealed, K'theenya was captured by the Orange Lantern Corps, who thought to control her and use her powers for their own ends. There she met up with Ynot, and they slew a dragon, after which he gave her a ride off the planet and built her her own spaceship, the Drunken Ferret. She has since set out with Shaern and Sonia in search of her "treasure".

After having found her treasure, she became a minor combatant in the Uterio War. Then, she was transported to help out a girl by the name of Diru. There she rescued Diru's sister Kithlara, and another girl by the name of Asharajaki from a compound doing research on unicorn hybrids run by the Kitsune Council.

Finishing that, she met with Klak and helped him gather the escaped prisoners from Malchior IV.

In her possession K'theenya has a mysterious jug. This jug was apparently made for her by an old friend. It changes it's appearance and size to different types of containers seemingly at random. It can produce any liquid K'theenya desires, but most often this is one of varying types of alcohol. After being drained it refills at a set rate. It has no known name, and K'theenya often refers to it as her 'treasure'.

Her ship is known as the 'Drunken Ferret'. The ship was abandoned on the planet of Lemuro due to shenanigans. Any plans to recover, or even if she remembers the ship's existence is unknown. 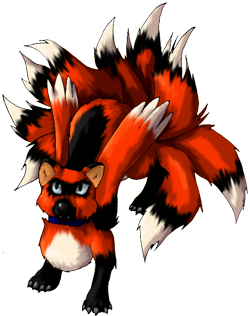 K'theenya in her "Chook" form

K'theenya has a wide variety of powers, a good deal of which stem from her strange heritage as a cross between a ferret angel and a kyuubi no kitsune. Unusual for a kitsune she is quite proficient with elemental spells not of her element.